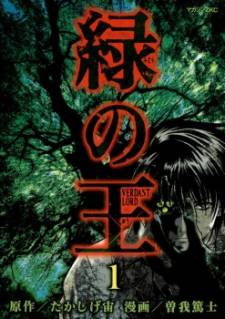 Set in the near future where Mother Nature has decided to fight back against all of the human encroachment. It has your standard apocalyptic scenario, but we're right in the middle of the apocalypse actually happening, rather than the aftermath. Vines and foliage entangle cities, as large wooden mech-like creatures called Arethusa (named after one of the mythical Greek Hesperides that tended the gardens in a remote corner of the world) rampage through cities. Our main character is Souma Shin, a punk kid out of Japan. We start off with him coming to visit his twin (?) brother Ken. All hell breaks loose as Shin finds a group of small kids being used for military purposes, and tries to save them in the confusion created by an Arethusa invading the compound.