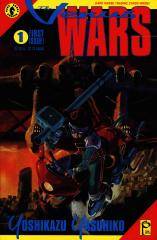 In the year 2003, a titanic collision between an immense ice asteroid and the planet Venus transforms Earth's closest neighbor into a habitable world. Eighty years later, two colonial powers, Ishtar and Aphrodia, glare at each other across a contested frontier. The militaristic Ishtar, hungry for Aphrodia's rich resources, has developed a supertank known as the Octopus to spearhead its assault force. Unable to face Ishtar's industrial might head on, Aphrodia counters with the Hound--a high-performance antitank battle cycle designed to outmaneuver the massive tanks and strike their weak points. The war won't wait and the fate of all Aphrodia is in the hands of Ken Falkirk, a suicidal motorcycle daredevil!