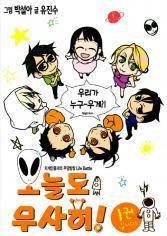 Let Today Be Safe As Well!

This is a story about aliens. Yes, aliens. Choi Sera houses displaced aliens in her home, where they all pretend to be UFO fanatics in order to explain their eccentricities. Sera’s job is to teach these aliens how to live in human society—not that difficult on the surface, as they ostensibly look like humans (except for the three fingers on each hand thing). They look normal, and they can communicate with earthlings via a translator that looks like a hearing aid, but can they act normal? The answer to that is a resounding no. Watch as Sera tries to school the emotionless twins, Seunghyun and Seungmin (really clones) on dating (with disasterous results), tries to keep Hyunwoo out of trouble, and keep them all from being taken away by the UN alien hunter who’s on to them. And what happens when a translator breaks?! Find out in Safe Again Today!