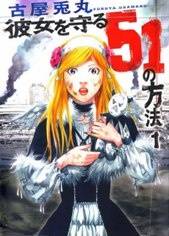 Kanojo wo Mamoru 51 no Houhou

February 23rd, 20XX. Looking for a job in the famous TV station at Odaiba, college senior Jin Mishima attended the recruitment orientation. Not far away from the station, Nanako Okano, a gothic lolita trying to attend a concert, found out that her friends tricked her about the concert ticket because of jealousy. The two bumped into each other and reunited -- they were junior high classmates -- moments before an earthquake of Richter Scale 8.1 turned the island (the entire city, in fact) into ruins. From here on, 51 Ways is a predictable but remarkably believable survival adventure. Based on a well-researched novel by Minoru Watanabe, the series paints a picture not quite as explicit and horrifying as ones in other apocalyptic fiction, but one that is frightening in its detail. Like many of Furuya s other works, we are also shown just how fragmented and superficial Japanese youth has become: gals, rock stars, Gothic Lolita s, otaku, salarymen, ganguro, and schoolgirls are all here in their self-imposed stereotypical, shallow glory. But while the ugliness of the fragmentation of Tokyo youth is striking - these people all come together in the face of disaster in a way that is ultimately hopeful. When you strip off the posing and expensive clothing: we are all the same. In the end, 51 Ways is one of Furuya s most optimistic and mainstream works. It would make a lovely gateway drug for more timid independant comic readers or shoujo fans looking for something with a bit more bite. (Source: ANN & Anime Online)