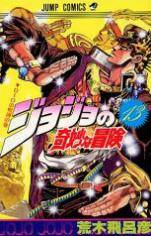 SERIES 3: "Stardust Crusaders" The third arc of Jojo's Bizarre Adventure, Stardust Crusaders takes place 100 years after Jonathan Joestar defeats Dio Brando. Dio is back, and Jonathan's descendants must travel to Egypt to destroy their ancestral enemy once and for all. On one side: Joseph Joestar and Jotaro Kujo ("JoJo" for short)...a globetrotting martial artist and his delinquent Japanese-English grandson. On the other side: a vampire and an army of murderers possessed by evil spirits, the monstrous "Stands". But Jotaro and Joseph have "Stands" too...and the stage is set for a terrifying battle as the heroes fight their way around the world! Adapted into anime, action figures and video games, JoJo's Bizarre Adventure is one of the weirdest, most influential Jump manga ever!