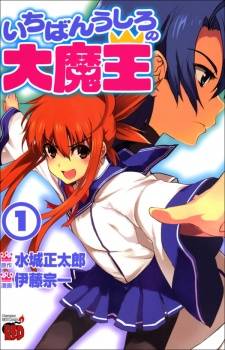 30th AD century, in a world that magic exists naturally, 100 years pasts since a great war between human races and the devil king. the war concluded by the human race's victory though it made many sacrifices, and slowly but surely the civilizations are also developing once again. One time, one witch walks down into a small town holding a newborn baby in her arms, she stopped in front of a church, put the baby in front of their door then disappeared. After that, ten years past, the baby took by the church was named "Akuto", and eventhough he was raised in the orphanage he put the people in awe and perplexity with his preaching about love of mankind and equality like a man of virtue. later Akuto decided he want to live in modesty so as not to trouble others, and before long a family offer themself to adopt him. However, on the day Akuto left the orphanage, a new girl was brought as a new family on the orphanage. The girl cant stop crying because of loneliness, making the adults around her in trouble. Akuto saw all that and he decided to bring all his money given by the orphanage for his future living expenses and bought a hair ornament with a jewel on it. He handed it over to the girl to make her stop crying and promised they ll meet again someday if she stopped crying and take a good care of the ornament. Five years later, Akuto passed the test to enter Constantin Magic High School, and left his foster father's home. He made a new friend on his way to the school in a bus, and he arrived at the school. then he underwent the vocational aptitude test, a test which is one of the school's rules to determine one student future occupation. "Examination Numbers: Number 021 , Name: Sai Akuto. Future Occupation: the Devil King