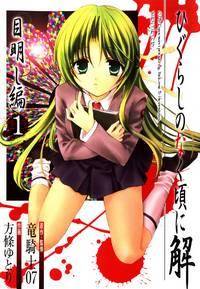 Summer 1983...Hinamizawa is a tranquil village, but its inhabitants have been plagued by strange deaths and unexplained disappearances seemingly every year. Some say its the terrifying curse of Hinamizawas legendary deity, Oyashiro-sama, causing victims to be spirited away by monsters, but is this town harboring dark, horrying secrets even more sinister than any supersition or myth? Solution to Watanagashi-hen. Meakashi-hen consists of the events of Watanagashi-hen told from the perspective of Shion Sonozaki, with only a few minor variations. In this chapter, the audience sees the true reason for the criminals murderous actions in Watanagashi-hen — a lost love. The first hints of that which ties together the arcs are given.