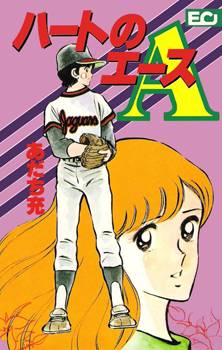 Ace of Hearts, Heart no A (Ace)

A collection of three short stories. Ace of Hearts: Akizuki Akira is the Jaguars' ace, but even he can't beat the Elephants' star player Edajima. When Sakura Misao joins the team it seems like they might have a chance, but Akira can't stand to be shown up by a girl and quits the team. Not one to disturb the peace, Misao leaves the Jaguars to find a new team, but when she finds a spot with the Elephants, who will win the final showdown? Teens: The morning of his first day at a new school, Wakamatsu Jirou accidentally helps capture a dangerous criminal, and rumours spread like wildfire. Now a living legend, he's the first and only line of defense against the delinquents that make everyone's lives miserable. Only problem is, he doesn't know the first thing about fighting! Fresh Leaves in the Wind: Class 5 wants to win the upcoming girls' softball tournament, but with school idol Yamazaki Misa on class 2's lineup, not even their own male classmates want to cheer for them. When an unathletic yet perceptive student by the name of Mizutani Hiroshi offers his aid as their coach, he might just be the perfect secret weapon.