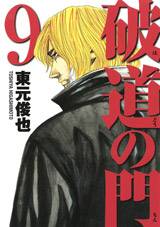 Gate to the Path of Destruction, Road of the Broken

Finally the ultra-modern real yakuza manga! Fujisawa Kenji, 17 years old. Born in Yubari, Hokkaido, a boy with the dream of being a mob member. After dropping out of school, Kenji went to his local Kumicho, who told him to learn the way of the Yakuza from a man known as "The Master Gangster" - Kujo Eiji. So Kenji went to Sapporo, where his new life would begin... The two men meet, an event that sears the souls of both - Who will be strongest in this new era gangster epic?