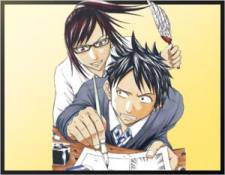 From MangaHelpers: A+ student Ichinose Taiyo is the brains of his class. His grades are always high, he's generally liked by his classmates and everyone thinks he will get into a good college then onto a financially well-off career. But his life long dream that no one else, not even his family, knows about is to be a manga author, which realistically speaking has near impossible odds of working out. The reasons why he keeps it a secret is because he'd rather not try if he's more than likely to fail and also because he doesn’t want to end up like his classmate Anezaki Runa. Runa is also aspiring to be a manga author but is obsessed with it to the point where everyone keeps a distance from her because of her anti-social and weird habits. But one day, Runa finds out about Taiyo’s secret and forces him to pursue his dream. Taiyo learns that throughout his life, he has cared too much about public perception which will continue to limit his ability as a manga author unless he opens himself up even if it means rejection. With Runa’s help, he learns to believe in his dream and show his true potential. [vyc]