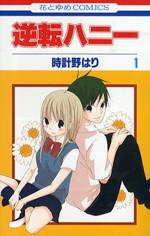 From Which Scanlations: One day, Kengo Yagami found some of his classmates teasing a turtle that lived behind their school--and he beat them up. But when the turtle spoke, he was so shocked that he kicked it as hard as he could. Unfortunately, the turtle was actually a god, and as punishment, he switched Kengo's body with his childhood friend Mitsuka's, and their new bodies are causing both of them a lot of trouble at school... Also includes the one-shots "Kirakira Hoshi no Ana" and "Kimi wa boku no Saboten."