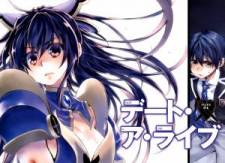 April 10th. Yesterday was the last day of spring vacation, so starting this morning it was a school day. After being woken up by his cute little sister, Itsuka Shidou believed that it would be the start of another normal day. As for predicting the chance meeting with the girl who called herself a spirit...... Along with a sudden shockwave, the townscape vanished without a trace. In a corner of the street which had now become a crater, the girl was there. "—You, have you come to kill me too?" She is the disaster that will destroy humanity, a monster of unknown origin, and a being rejected by the world. There are only two ways to stop this girl: annihilation, and conversation. His little sister Kotori, wrapped in a military uniform, thus said to Shidou: "Since it's like this, just go date her, and make the spirit fall for you!" "Wh.. whaaaaaaaat!?" Enter a new age of boy meets girl!!